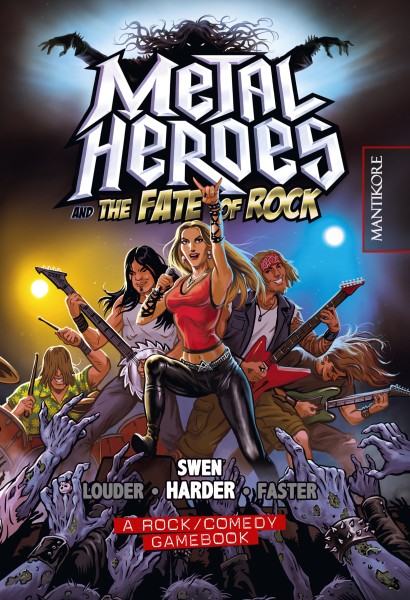 Description
Description
You are Taylor, a full-blooded rocker and a full-time idiot. You’re leading a miserable... more
Close menu
Product information "Metal Heroes and the Fate of Rock - A Rock/Comedy Gamebook [ENGLISH]"

You are Taylor, a full-blooded rocker and a full-time idiot. You’re leading a miserable existence in a shitty metropolis when, unexpectedly, the God of Rock tired of office chooses you to be his successor. Your challenge: Prove your aptitude for Mt. Olympus by building up a talentless garage band with no prospects to become the greatest Metal act on the planet—and, along the way, save the world.Metal Heroes and the Fate of Rock is filled with all the pitfalls, clichés and famous figures that the rock scene has to offer. Combined with a goodly portion of humor and tough talk, this somewhat different fantasy gamebook in­vites you to master its challenges.As counterparts to the testosterone-driven Metalheads, Jill Janus and Charlotte Wessels raise their voices to rescue the music world.The accompanying soundtrack directly in­flu­ences the pro­gress of the gamebook and contains international metal bands from all stylistic directions like Alestorm, Cavalera Conspiracy, Delain, DevilDriver, Gormathon, Grave Digger, Huntress, Mammoth Mammoth, Striker, and Visions of Atlantis, plus an exclusive Metal Heroes track from Garagedays.Hardcover gamebook features:* more than 100 interior illustrations by comic artist FuFu Frauenwahl* over 1,300 sections which bring the story to the max* soundtrack with 16 songs, implemented in the story